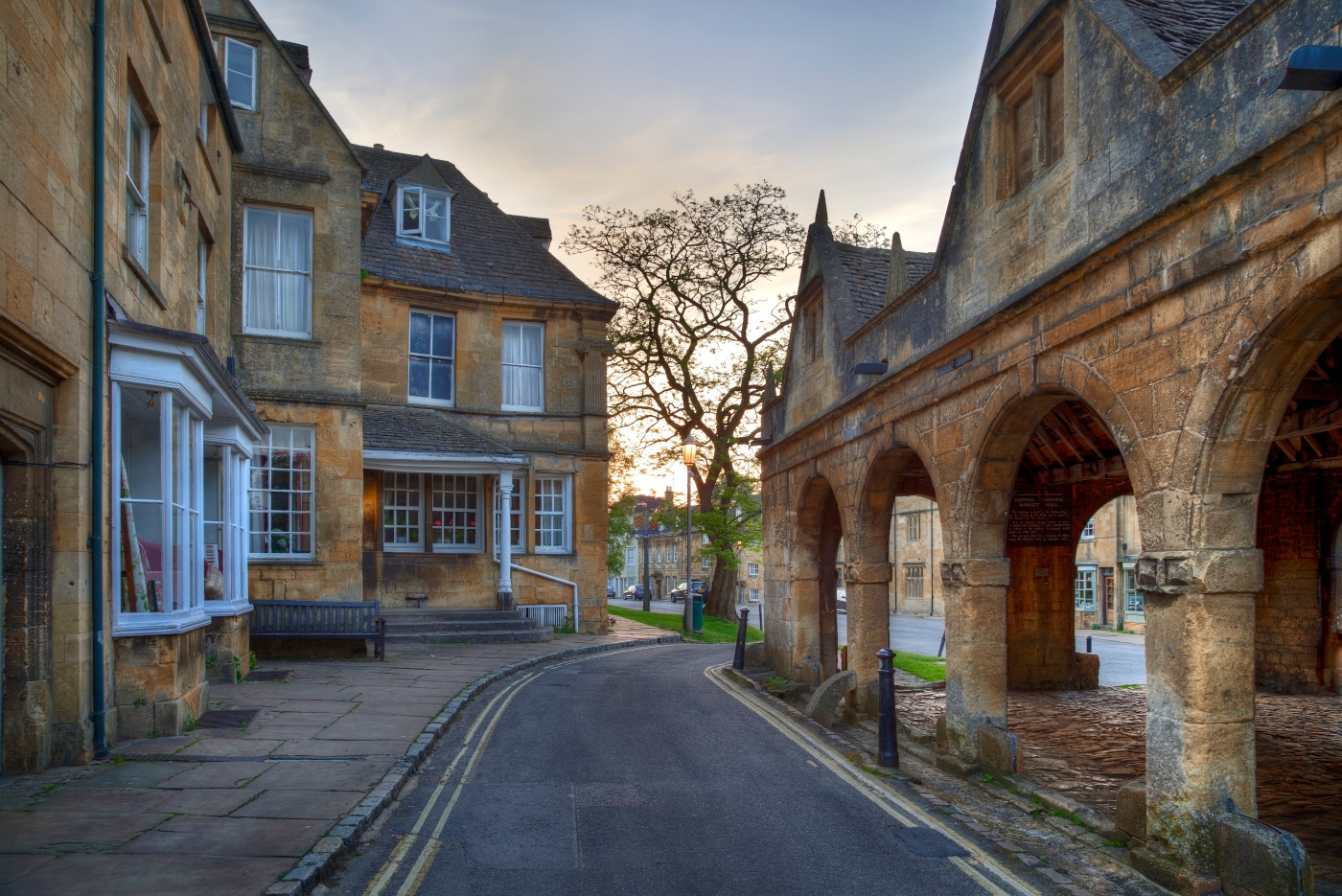 The History of Chipping Campden

by Emily Crane / History and Heritage

In this article we take a look at the history of Chipping Campden, one of our favourite destinations in the Cotswolds.

Situated in the northeast of Gloucestershire, the town (a large village really!) has all the hallmarks you’d expect from a typical Cotswolds settlements, as well as a fascinating history. Read on for an overview of the history of Chipping Campden.

What does Chipping Campden mean?

It was given the name Campden which comes from an old Saxon word “Campa-denu” or “Campadene”, meaning enclosures of cultivated land or a valley with fields. The Chipping came later and derives from an old English word ‘Ceping’ meaning market or marketplace.

Chipping Campden and the Wool Trade

Today, Chipping Campden is renowned for its beautiful High Street, which is constructed of an unbroken line of terraced houses, but one that showcases many different styles of architecture. This street has prompted historians such as G.M. Trevelyan to comment that Chipping Campden is “the most beautiful village street now left on the island”. Chipping Campden made its wealth through the wool trade in the 13th century, and many buildings associated with this commodity are still present in the town today. 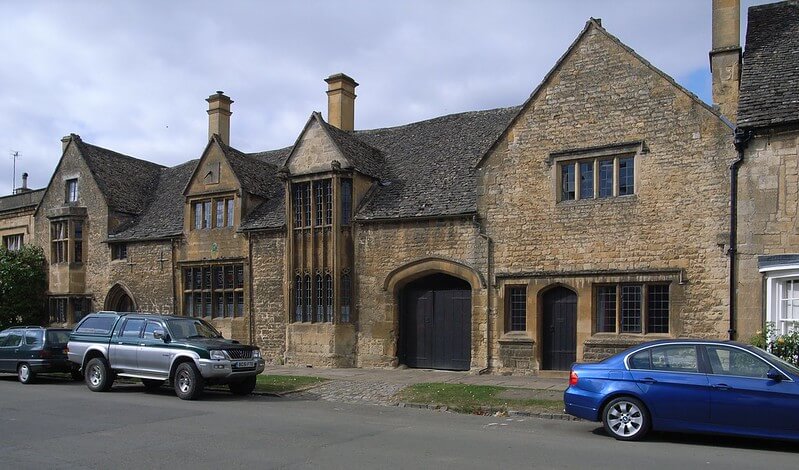 One such building would be Grevel House, a majestic honey-stone property complete with intricately decorated windows, obligatory gargoyles and a sundial. Built in 1380 by William Grevel, Grevel was one of the country’s most influential wool traders who lived in the town. He spent most of his time in London, as he was a financier to King Richard II. The house, despite being the oldest in Chipping Campden, was the first in its time to have proper chimneys instead of just holes in the roof.

The Importance of the Wool Trade in the Cotswolds

Built in 1340, and standing opposite Grevel’s House is The Woolstaplers Hall, which served for hundreds of years as the wool exchange in the town. The hall attracted thousands of merchants from across the globe, where traders would come to buy the much-coveted Cotswolds fleeces. It is hard to imagine the importance that the wool trade had upon Britain in these times, but not when you realise that 50% of all England’s economy was down to the wool trade.

Wool played such a huge part in people’s lives that the ‘Burial In Wool Acts’ of 1667 and 1678 decreed all bodies had to be buried solely in wool. That is unless they had suffered from The Plague and had an affidavit sworn accordingly. The penalty for not doing so was £5. These acts were repealed in 1814, but the saying “You can’t pull the wool over my eyes” came from being buried in a shroud of wool, and meant ‘I am not dead!’

The trading of wool also allowed ‘wool churches’ to be constructed, with the 14th century St James’ in Chipping Campden a fine example of an early perpendicular wool church. The church is a landmark for the town, with its pierced parapet and ogee arches, and pinnacles topping the diagonal buttresses jutting into the skyline. Built with money from the wool trade, it was rebuilt in the 15th century. Rumour has it that every lime tree that leads from the porch to the main entrance is meant to signify an apostle. 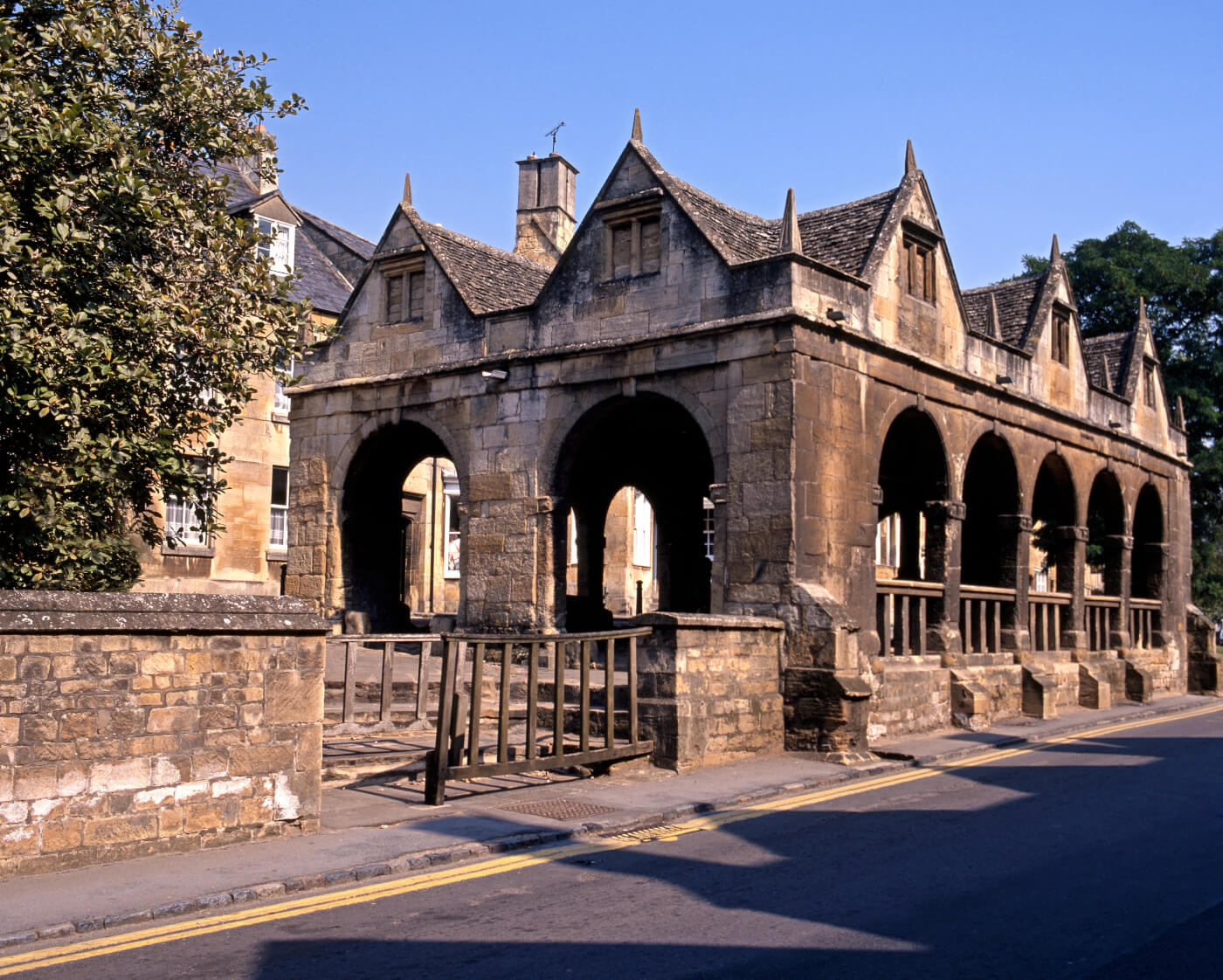 Not every building revolved around the wool trade however, and one that you would think definitely should have been, but wasn’t, is The Market Hall. Built in the 17th century with a donation from Sir Baptist Hicks, the Hall was constructed to allow the local market traders selling cheese, butter and poultry to shelter from bad weather. 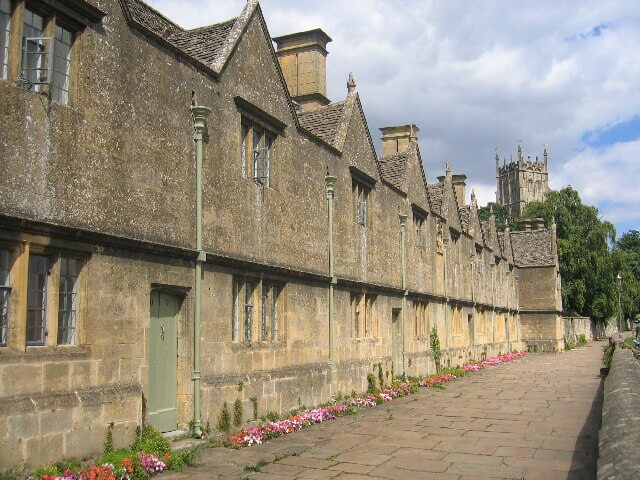 The Alms Houses in Chipping Campden

The Market Hall is still used today by local traders, as are The Almshouses, a row of terraced houses built in 1612 by Sir Baptist, and costing £1,000 to build. The houses were constructed to provide housing for prisoners. Today The Almshouses provide accommodation for twelve elderly people and apart from the addition of a modern kitchen and bathroom, remain much the same as they did in the 17th century. In fact, Sir Baptist’s coat of arms and motto is still visible on the front of each door that reads ‘NONDVM METAM’ and means ‘I shall not fear yet’.

Sir Baptist was also responsible for building one of the most important Jacobean sites in the country, The Banqueting House in 1613. Originally Sir Baptist used this house to treat guests to sample rare wines and taste sweetmeats. In 1645 a nearby building, the Old Campden House, was destroyed by fire by Royalists, and the remains can still be seen.

The Arts and Craft Movement in Chipping Campden 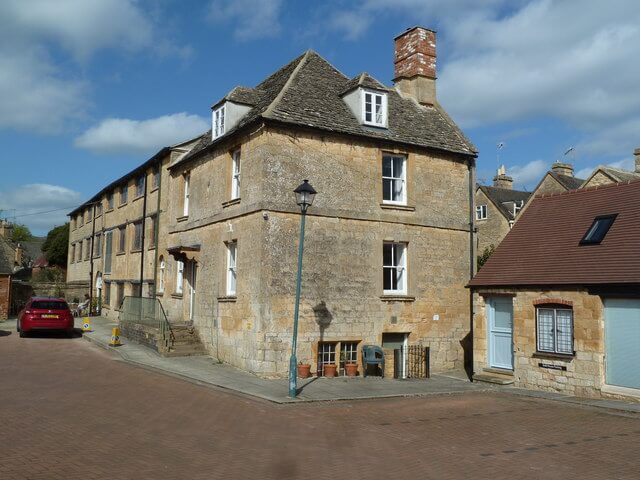 The Old Silk Mill in Chipping Campden, now the Gallery at the Guild

When the wool trade died out, Chipping Campden became more associated with the Arts and Crafts movement. The Old Silk Mill was the centre for this movement as Charles Robert Ashbee set up his workshop here from London’s East End, back in 1902. It closed in 1908, but many artists who followed Ashbee stayed on in the town, including F.L. Griggs, the etcher and the builder of Dover’s House, and writer H. J. Massingham, the rural writer who wrote about the English countryside.

Today it stands as a museum, and some of the descendants from the original craftsmen of those times still work here, producing items that are renowned globally.

Chipping Campden is considered to be one of the most magnificent towns in the Cotswolds, and with its varied architecture, array of interesting shops and restaurants and location within an area of outstanding beauty, it’s not hard to see why.

Take a look at our selection of cottages in Chipping Campden and explore this wonderful town for yourself.

by Emily Crane / History and Heritage

I joined the Marketing team in January 2018, after having previously been part of Property Recruitment here at Sykes Holiday Cotta... 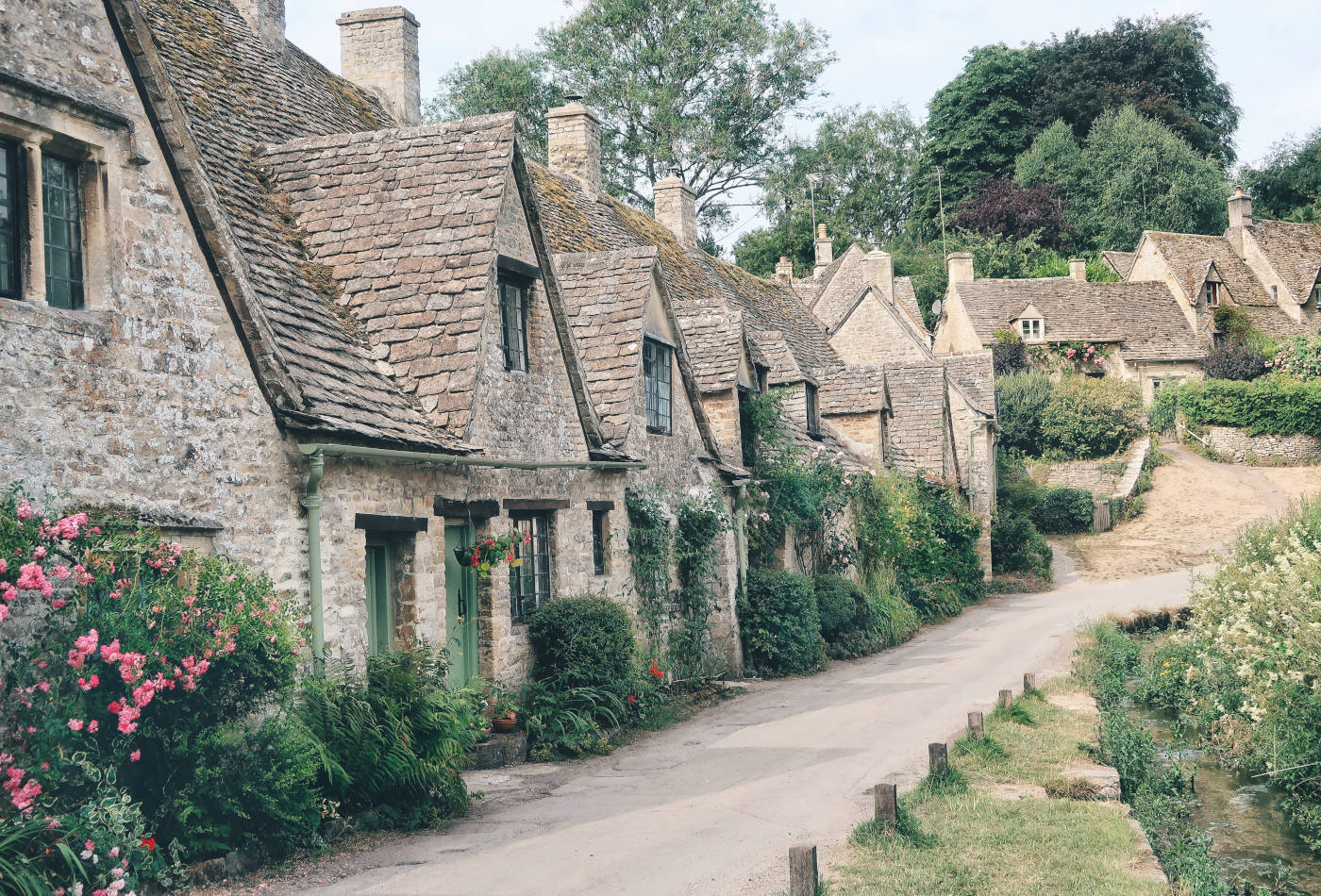 Tucked away in the heart of the Cotswolds is the picturesque location of Arlington Row. Recognised as one of... 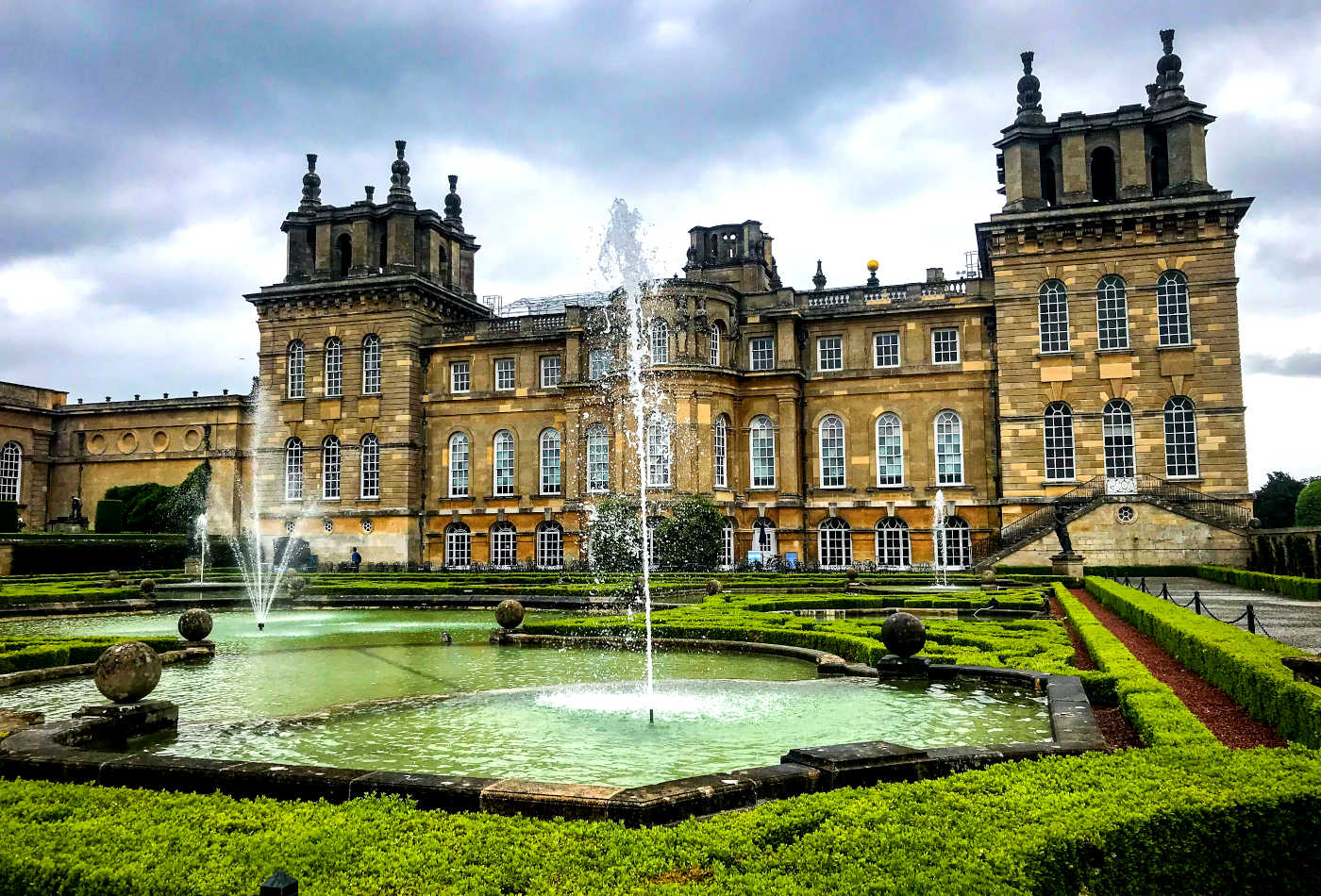 Your Guide to Visiting Blenheim Palace

Learn how Blenheim Palace became an integral part of British culture and how it grew from a family home...

3 Stunning Cotswolds Castles You Must Visit

The Cotswolds is a fantastic location for so many reasons. It may be best known for its rolling hills,...